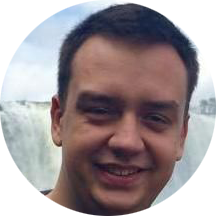 Konrad Stawiski is a Ph.D. candidate and a medical doctor with special interest in data science, machine learning, image processing, bioinformatics and software development. Being a recent graduate of the Faculty of Medicine at the Medical University of Lodz in Poland, he has also started his doctoral studies supervised by prof. Wojciech Fendler at the Department of Biostatistics and Translational Medicine at the Medical University of Poland. During his time in medical school, Konrad Stawiski was numerously awarded for his research commitment; including scholarships of Minister of Science and Higher Education & Minister of Health of the Republic of Poland for outstanding achievements, a distinction in a nationwide competition “Students’ Nobel Price” and Polish “Graduate of the Year 2016” title. Konrad Stawiski is currently taking part in many research projects involving clinical medicine, bioinformatics and bioimaging. To this day, Konrad Stawiski has published several articles, presented numerous research papers out of which over 15 were awarded by various scientific committees. Konrad Stawiski’s research was also previously funded by the grant program of polish Minister of Science and Higher Education called “Generation of the Future”, which is one of the most important students’ grant programs in Poland.

← Back to our team
Scroll to top